12 Coolest Things to Do in Dresden

Once known as the “Florence of the North,” Dresden is a beautiful German city with a curious mix of old world and new world blending together almost seamlessly. Although much of the city was destroyed by American fire bombing during WWII, there has been significant restoration and rebuilding of the most famous structures in Dresden in the years since the war. Dresden now looks similar to how it did pre-war, serving as a nice example of the prosperity of eastern German provinces during the 1700 and 1800s.

Dresden is a fairly off-the-beaten path destination for North American travelers, but I think it is well worth a stop on a longer tour of eastern Germany. In fact, I wrote a whole 1 week itinerary for Saxony if you are looking to plan your visit. Nonetheless, there are plenty of things to fill a visit to Dresden. I think a 48 hour visit is the minimum amount of time you’ll need to do all the cool things on this list.

The 12 Very Best Things to in Dresden

The Zwinger at Sunset

Set in the heart of Dresden, the massive Zwinger complex was the home of Saxony’s royal family and government during the height of its power in the 17th & 18th centuries. It has since been converted to a number of different museums and restaurants. Styled in the classical baroque styles, I think the Zwinger is one of the most beautiful palaces in all of Germany.

Sunset is the best time to visit the Zwinger Dresden because the lighting is absolutely stunning as it bounces around the courtyard of this historic baroque building. The central pools in the garden create perfect reflections of the building, and you’ll definitely be inspired to snap some creative shots. You’ll see plenty of other people taking photos around the garden and crowned tower of the Zwinger at golden hour, but thankfully the palace is big enough to get uninterrupted photos regardless of any crowds.

If you want to actually admire the interior of the palace, you’ll need to visit one of the museums inside the Zwinger. I recommend the national porcelain collection. This might sound like a snooze to anyone whose mother collected porcelain statues as a child (mine certainly did) but trust me — this museum is so much more than little figurines. The porcelain collection at the Zwinger includes many pieces from one of Saxony’s most notorious kings, Augustus the Strong. His love for porcelain was seemingly boundless and some of the pieces are absolutely huge. He commissioned an entire zoo featuring life-size animals made of porcelain which you’ll find inside this museum.

Along the outside of the Stallhof building is a dramatic porcelain mosaic mural called the Fürstenzug. This large mural depicts the centuries’ long procession of Saxon rulers shown in chronological order.  The mural displays the ancestral portraits of the 35 margraves, electors, dukes and kings of the House of Wettin between 1127 and 1904. It was originally painted between 1871 and 1876 to celebrate the 800th anniversary of the Saxon dynasty. The mural was replaced in the early 20th century with Meissen porcelain tiles (more on Meissen below). Approximately 23,000 porcelain tiles were mounted to the building, stretching over 330 feet. It is  the largest porcelain artwork in the world.

Hunt for Street Art in Neustadt

The new city of Dresden, Neustadt, has developed over the years on the opposite side of the Elbe river from the old town. It is almost like rivaling cities because the vibes are completely different! Neustadt is where you’ll really get a sense of what Dresden is all about today. You are bound to notice a lot of street art while walking around Dresden’s Neustadt. In fact, it is one of the things this neighborhood is most known for! Kunsthofpassage is an entire alley dedicated to murals and street art connecting Gorlitzerstrasse and Alaunstrasse. It has become so popular that little restaurants and cafes popped up inside the alley.

Even if you’re not a museum person, one collection that you shouldn’t miss inside the Residenzschloss is the historic Green Vault. This vault was commissioned by the extravagant King Augustus to house his personal collection of unique treasures from around the world. After extensive damage from the war, the vault was restored to its colorful original splendor, now housing one of the most impressive collections of ‘treasures’ I have ever seen. There is a silver room, jewelry room, ivory room and lots more!

You can only visit the vault on a guided tour with a ticketed timeslot. You need to make a reservation online ahead of time. It is best to reserve a few days in advance — it is worth all of this work I promise! There are no photos allowed inside the vault, and the one you see below are from the museum’s website. The reason being, in 2019 the vault was actually robbed in one of the biggest jewelry heists in modern history and the investigation is still ongoing.

One of the most iconic buildings in Dresden is Freuenkirchen, and it is definitely a must-see attraction on a 48 hour visit to Dresden. This Lutheran church has a stunning exterior with a unique shape. It has the Baroque style characteristic of the 18th century. The current structure was built on the foundations of a Catholic church, but it was converted to Protestant during the Reformation. Martin Luther, of the Protestant Reformation in the 1500s, was born and preached in this area of Germany, so you’ll see a statue in his honor in front of the Freuenkirchen. You’ll definitely want to go inside the church because the unique pale pink and blue interior is something special. The massive organ in the heart of the church is gorgeous!

In case you didn’t know, Germans love cake. Eating kaffee & kuchen is a common afternoon activity, especially on the weekends. Each region in Germany has different specialty cakes and tortes, some of which are incredibly famous such as the Black Forest Gateau. In Dresden, the local cake speciality is called Eierschecke. It is composed of several layers of sponge cake, egg custard and vanilla pudding. It reminds me a little bit of a Boston Creme Pie. The best place to sample Eierschecke is at the cozy Café Schinkelwache across the street from the Residenzschloss.

If you need a great coffee to pair with the cake you just ate, look no further than Phoenix Coffee Roasters in Neustadt. This outfit has won awards for their freshly roasted and intensely flavored brews. The roastery smells incredible, and the knowledgeable staff can provide tips and recommendations if you aren’t familiar with their coffee blends. The roastery is coffee only, so if you need a snack or full service lunch, pop into the stylish Café Oswaldz down the street. This hipster hangout brews Phoenix’s roasts to perfection and you’ll be happy with any of the deeply delicious sandwiches and snacks they offer. Sit out in the private garden behind the cafe if you can!

One of my favorite things about living in Germany is the month of December when I can visit the country’s fantastic Christmas Markets. Considered one of the oldest and best Weihnachtsmarkt in Germany, Dresden is truly magical around Christmas time. Dating all the way back to the 15th century, the Striezelmarkt has preserved its distinctive character throughout the years. It is a really good example of a traditional German Christmas Market, full of charming stands, beautiful lights, and delicious food. You can see the world’s largest Erzgebirge step pyramid at over 14 meters tall. More than 2.5 million people visit the romantic Altmarkt Square Christmas market every year.

Sometimes called “the balcony of Europe”, Brühlschen Garten offers stunning views over the Elbe river of both old and new Dresden. I think this is one of the best places for photography in the city, and I loved visiting during my 2 day visit in Dresden. A few buildings to note for architectural beauty are the Academy of Fine Arts and Albertinum Art Museum, both of which back up onto to the garden. It is especially pretty at sunset if you remember to come back!

Like many German cities, a central feature of Dresden is the river that cuts through it. In Dresden’s case, it is the Elbe River. Walking on the north side of the river between the Marienbrücke and Albertbrücke is a wide grassy park with sweeping views of the Dresden skyline. It is especially night at sunset! If crossing over the Elbe river on the Augustusburg bridge from the Altstadt, definitely stop by Augustusgarten beer garden to a beer (or four). This patio is popular with locals and tourists alike, making it great for people watching.

Serving as the inspiration for Mendl’s Patisserie in Wes Anderson’s film Grand Budapest Hotel, Molkerei Gebrüder Pfund is a cheese shop covered from floor to ceiling in hand painted blue and green tiles. It is quite something to behold! The experience of shopping in the store can be unpleasant, since it is very popular and usually crowded, but it is a beautiful store. There are no pictures inside the shop (despite what you might see on Instagram) and the one featured below is borrowed from the shop’s website. Make sure that you support them with a purchase as many people just come to snap photos clandestinely.

If you’ve ever been curious about the process of porcelain making, then a visit to the city of Meissen is a worthwhile day trip from Dresden! Meissen was the birthplace of porcelain making in Europe in the early 1700s. The origin of this 300+ year tradition dates back to King Augustus who was an avid art collector, with porcelain being one of his favorite mediums. He started a royal commission specifically for the production and perfection of porcelain in Meissen.

You can learn about the history of porcelain making (along with plenty of other regional history) at the towering Albrechtsberg Palace in the center of town. Similar to the Weesenstein Palace above, you can tour Albrechtsberg on your own without an organized tour. The interior of Albrechtsberg is packed with exhibits and you could easily spend several hours here if you read all of the material. I particularly liked the helpful signage at this museum! Make sure to pop across the river after your visit to snap a great photo of the palace overlooking the charming town.

Do you have questions about visiting Dresden? Comment below! 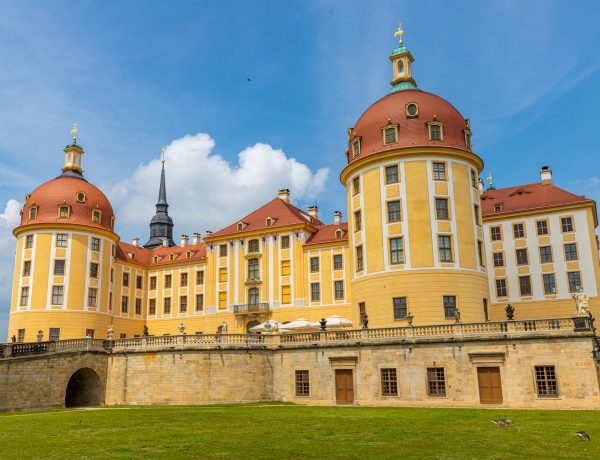 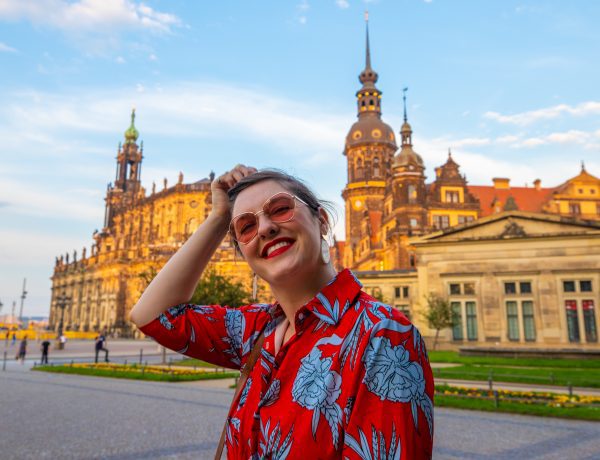 What To Do with 2 Days in Dresden

How to Spend 1 Week in Saxony: Eastern Germany's Coolest State