12 Best Things to Do Along the Romantic Rhine

The 65 kilometer stretch of the Rhine River between Koblenz and Rudesheim am Rhein is the called Upper Middle Rhine Valley. It is also called the Romantic Rhine because it is considered to be one of the most beautiful parts of the river. With its steep-sided banks covered with Riesling wine vineyards and topped with medieval castles, it’s no wonder that UNESCO declared this 65 kilometer stretch of the Rhine River a World Heritage Site.

The Rhine river runs from south to north through Germany, originating in the Swiss Alps and emptying into the North Sea. The best time to visit the Upper Middle Rhine Valley is from May to October. If you visit in the off-season, you’re likely to find many of the restaurants and shops are closed. But in the heart of the season, formerly sleepy towns will be full of wine festivals, cycling groups and outdoor patio restaurants. While there will be more people around, it doesn’t feel particularly busy or crowded.

My husband and I have visited the Upper Middle Rhine Valley each year since moving to Germany as part of our anniversary celebrations. We usually go for a long weekend stay, because it is a beautiful section of river that offers plenty for tourists to explore! I am here to share all of our insider tips about everything you should do, eat and see while traveling the Romantic Rhine.

12 Best Things to Do Along the Romantic Rhine

Cool Attractions to Visit in the Rhine

Koblenz ranks among Germany’s oldest cities and bursts with sights from the past 2,000 years including Ehrenbreitstein Fortress. You can take a cable car ride over the Rhine river to reach the fortress, which is a beautiful way to see the immensity of this important German river. Ehrenbreitstein Fortress is a strategic military outpost perched on a high rock plateau that has been almost continually occupied since as early as the 4th century. The fort itself has been converted to a museum, which I found kind of boring. But what you really come up here for is the view! The fort offers the most incredible view of Koblenz and you will get a bird’s eye view of the Rhine + Moselle coming together.

Germany is well-known for its nearly 20,000 castles, one of which sits just outside of Koblenz along the banks of the Rhine River. Schloss Stolzenfels dates back to the 13th-century, but was largely destroyed during the 30 Years War. It was then rebuilt in the 1800s in neo-Gothic style. Similar to other castles in Germany, you can only see the interior on a guided tour and photography is strictly forbidden. When I visited, the tour was only in German but there were language translation sheets for each room, offering English, French, Spanish, Chinese and Japanese translations.

In the various rooms on the tour of Stolzenfels, you’ll find paintings, weapons, armor and furnishings from the mid-19th century which were left when the castle was abandoned. I especially enjoyed the quaint gardens surrounding the castle as well as the lovely views over the Rhine. The castle can only be accessed on foot, and you’ll be required to park your car at the bottom of the steep hill.

One of the top attractions in the Upper Middle Rhine Valley is the fabled Lorelei rock located in the Rhine Gorge. As the Lorelei myth goes, there was a beautiful maiden who threw herself into the Rhine River in despair over a cheating lover. She was transformed into a siren who lured fishermen traversing this river to their deaths. I didn’t know how much Germans loved this myth until I was on a night cruise on the Rhine. When we passed by the Lorelei rock, people were pushing each other aside and telling people to move out of photos as if they were seeing some sort of cult celebrity. It was quite a highlight for German travelers and a funny cultural experience for the rest of us.

Best Small Towns to Visit in the Rhine

Red sandstone rock is used throughout the old city of Mainz, making it a picturesque place to explore in an afternoon. Mainz boasts a rich and diverse heritage, and is absolutely flush with museums and cultural attractions. You can learn about the history of Mainz and Roman influences in Germany more generally at the Roman-Germanic Central Museum which maintains some of its most important artifacts in the historic Electoral Palace in Mainz. To learn about Roman sea faring, the Museum of Ancient Seafaring actually has full-scale replicas of Roman galleon ships. Did you always love the Gutenberg competitions as a school kid? Well you can see fascinating displays depicting the life and times of the inventor, who was born in Mainz, at the Gutenberg Museum.

Probably the cutest of all the Rhine towns, Bacharach is a genuinely enchanting place to explore in one day on your Romantic Rhine tour. It draws lots of tourists for its time-capsule quaintness, but don’t let that scare you off. It never feels overwhelmingly crowded, especially as you tuck into quaint alleys and lantern-lit streets. There are plenty of wood timbered houses in Bacharach to snap photos of, but don’t miss the one that dates back to 1368! It is called the ‘Altes Haus’ or old house in German, and is now a restaurant perfect for lunch or dinner. For some town views, take a short walk uphill to the Wernerkapelle ruins, which make a great Instagram backdrop. Also take a peek inside St. Peter church, a great representation of German romanesque and early French gothic architecture.

Boppard is a popular destination for wine lovers, thanks to its convenient location surrounded by vineyards. Each year in September, Boppard hosts a harvest festival which surrounds the Romanesque St. Severus Church and Main Square in the center of town. Stop by the 2,000 year old Roman fortifications at the Roman Fort. This is widely considered one of the best-preserved antiquity fortresses in Europe, thanks to the preserved 28 circular towers and large sections of old walls. You can freely wander this ancient fortress to get a sense of the massive 12-acre footprint that it used to occupy.

For a delicious dinner with exceptional views, ride the Sesselbahn Boppard chairlift up to the top of the 240-meter-tall Gedeon hill. There is a lovely viewpoint at the top, offering sweeping panoramic views of the largest bend in the Rhine River. Before riding the chairlift back down, stop for dinner at the well-regarded Gedeonseck restaurant. The massive terrace is a perfect place to watch the sunset while drinking a beer and enjoying dinner.

Cool Activities to Do in the Rhine

If you’re looking to experience views of the Rhine and surrounding castles from above, consider taking a day hike on the RheinBurgenWeg (Rhine Castle Trail). This 200 kilometer moderate scenic trail offers hikers unbeatable views of this region. The trail is broken into 13 different stages or sections. Stages 7 – 13 are in the Upper Middle Rhine Valley.

A perfect day hike option is stage 10, a 9km path starting in Sankt Goar and ending in Oberwesel. On a sunny day, you’ll find plenty of outdoor-loving Germans on this trail! The hike will take about 3 to 3.5 hours, taking you past several cute towns as well as the fabled Lorelei (more on that below). If you get too tired for the walk back, you can always hop on the boat for a short ride back to Sankt Goar.

Sleep in a castle

One of the places you absolutely must stay while visiting this region of Germany is in a castle hotel. There are several medieval castles along the Rhine that have been converted into hotels and hostels, making for a unique and historic night sleep! Prices for castle hotels vary widely based on amenities. On the lower price end, there are hostal accommodations such as the one I mentioned in Bacharach (Jugendherberge Stahleck) or the Rheintal-Jugendherberge Hostel in Oberwesel.

For something a little bit more romantic, I absolutely loved our stay at Burghotel Auf Schönburg in Oberwesel. Each room in the castle is unique and your overnight rate includes full board, including wine. The views here are incredible, and you can visit the attached museum and gardens for free. Another luxury castle hotel option is Burg Reichenstein in the tiny town of Trechtingshausen. The rooms here are a little more modern than Schönurg, but you can expect the same white glove service and full board at the castle restaurant, Puricelli.

The Romantic Rhine is a popular destination for river cruises and many of Europe’s main tour companies visit the region on organized tours. However, there is no need to book an expensive cruise to see the Romantic Rhine. You can easily do it as an independent traveler by simply taking low commitment 1-2 hour cruise options with the KD River Cruise line! I particularly like this operator because they have several different boats running during the day. This gives you the freedom to jump off at one destination, and hop on another boat a few hours later. Sankt Goar and Sankt Goarshausen are popular locations for picking up ferry and cruise boats. Make sure to grab a timetable (Fahrplan in German) to see all the scheduled trips the day of your ride.

For a truly wonderful way to explore the Romantic Rhine, consider cycling! You’ll see plenty of cyclists using the riverfront path which is flat, paved and protected from cars. It is a super safe and scenic way to enjoy the region. The Rhine Cycle Route along the Romantic Rhine stretches 120 kilometers along both sides of the river between Rüdesheim and Remagen. If you get tired along the ride, you can always bring the bike onto the train and transport yourself with your bike to your final destination.

Best Things to Eat & Drink in the Rhine

This picturesque region is renowned for white wine, especially its Riesling. The grapes originate from the Roman times when they brought grapes here in order to provide a local source of wine for their garrisons. You’ll find that Germans are quite proud of their white wine. In fact, Germany is responsible for approximately 50% of the world’s Riesling cultivation and production.

The white wines of the Rhine region are particularly cherished for their refreshing mineral notes and fruity aromas. This flavor profile comes from a characteristic microclimate that exists here, as well as the growing conditions on the steep silty slopes. Riesling wines can be either dry (trocken), semi-sweet (halbtrocken), sweet (lieblich) or sparkling, although inexperienced Riesling drinkers are likely to find all of them a bit sweet. Most of the vineyards in the Rhine are quaint family-run operations that produce mostly for domestic consumption, with some European exports.

Most of the cuisine in the Upper Middle Rhine Valley is regional German fare and my favorite thing to eat is Flammkuchen. This is a German flatbread. You’ll sometimes hear people call it German pizza, but Germans (nor Italians) particularly like that characterisation. The most traditional Flammkuchen is a crispy thin crust topped with bacon, creme fraîche and white onion. You will sometimes find other toppings, such as a vegetarian version or with seasonal ingredients, but the creme fraîche is almost always the sauce. It is cooked at a very high temperature for only a couple of minutes until the creme fraîche melts slightly and the crust browns. You’ll often see it shared among friends as a starter or snack, but it can easily be ordered as a main dinner.

Do you have questions about visiting the Romantic Rhine? Comment below 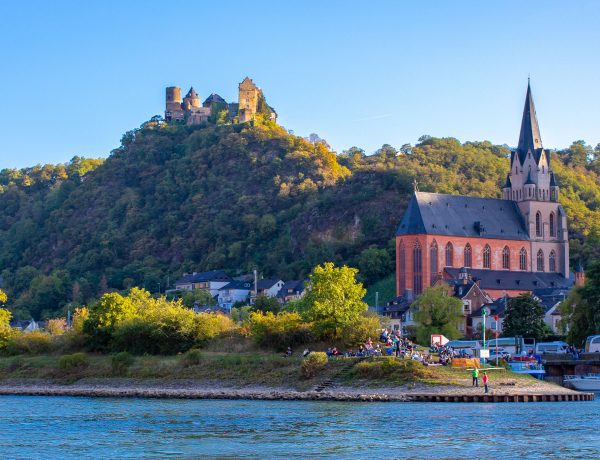 Local's Guide to the Coolest Things in Cologne